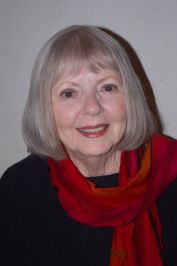 As a journalist and literary critic for more than 20 years, Betty -- a resident of Scottsdale, Arizona, where her detective Lena Jones also lives -- has interviewed U. S. presidents, Nobel prize-winners, astronauts who’ve walked on the moon, polygamy runaways, the homeless, and the hopeless.

Now retired from journalism to write full time, she also contributes the Small Press column for Mystery Scene magazine and teaches creative writing at Phoenix College.
In her writing, Betty makes liberal use of her own varied background. She earned her way through art school by working as a folk singer but eventually gave up singing to concentrate on her art career. At various times she has picked cotton, raised chickens which laid blue eggs (Speckled Hamburgs), worked in a zoo, been a go-go dancer and horse breeder, taught Sunday School, founded a literary magazine, helped rebuild a long-abandoned 120-year-old farm house, and back-packed the Highlands of Scotland alone.

In 1982, Betty moved to Scottsdale, Arizona, where her Lena Jones novels are set, but her roots are in Hamilton, Alabama, where most of her extended family still lives. In 2000 she published The Webb Family of Alabama: Survivors of Change, which focused on the descendants of her half-Seneca, half-English great-great-grandfather, William Douglas Webb, who ran away to sea at the age of 16, then after 14 wild years, settled down to farm peacefully in Hamilton. Recent DNA testing, however, has revealed that her seafaring ancestor harbored a big secret: he might not have been a Webb after all, but the descendant of a New Jersey colonist family named Price. Betty is now working to unravel this real-life mystery: did William Douglas Price change his name to Webb. Was he on the run from the law? (As a mystery writer, she kinda hopes he was)

On her mother’s side, Betty can trace her roots back to the Barons of Riddell in medieval Scotland. The Riddells, friends and financial supporters of the poet Robert Burns, did not always enjoy the best of reputations. The opera, Lucia di Lammermore, about a young bride who decapitates her husband on their wedding night, was based upon a real life incident in the Riddell family. But the Riddells maintain that Lucy (her real name) merely scratched her bridegroom, and that he simply overreacted when he screamed out, "Murder!" Anyway, that’s the Riddells' story and they're sticking to it.

"The impact of my unusual family upon my life has been profound," Betty says. "That's why I thought it would be intriguing to create a detective who had no idea of where she came from or who her parents were. Creating the orphaned Lena Jones has helped me appreciate my own ancestral heritage - both the good and the bad." About the recent DNA testing results, she adds, "All this time the Webbs were keeping an even bigger secret than the Riddells -- and they didn’t even know they were! How could I not have become a mystery novelist."
Website:
http://www.bettywebb-mystery.com
Genres:
Mystery Thriller