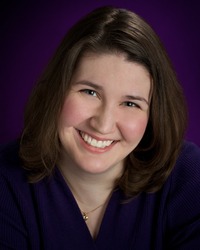 My mother remembers an 8-year-old me setting up my “writing office” in our living room by putting her old manual typewriter on the couch next to a toy phone. And I (very slowly) pecked out the story of my third-grade class taking a trip around the world and losing a kid in each city.

I had a dark sense of humor, even then.

In high school, when other girls my age were writing poems about dying unicorns and bleeding roses, I was writing essays about having political arguments with my dad at the dinner table. (Whoever made the other person laugh at their own political party won the argument.) I knew I wanted to write when I grew up, but I also knew there was very little chance I could make a living writing books, so I went for the next best thing – newspaper writing.

I majored in print journalism at Western Kentucky University and used my shiny new degree to get a job at my hometown newspaper. I married my high school sweetheart, David, a local police officer. And for six years, I wrote about school board meetings, quilt shows, a man “losing” the fully grown bear he kept as a pet in his basement, and a guy who faked his death by shark attack in Florida and ended up tossing pies at a local pizzeria.

I loved my job at the paper. I loved meeting new people every day and never knowing where I would end up. But somehow, the ever-shifting schedules of a police officer and a reporter did not equal "family friendly." One of us needed to take a normal job for the sake of our young daughter. I took a secretarial position at a local church office, which left me with dependably free evenings for the first time in my adult life. David was working the night shift that summer and I was losing.my.mind. We were living in "The Apartment of Lost Souls" while building our new home. This was the place where appliances and small electronics went to die. Every night I would tuck our snoozing child into bed and wait for the washing machine to start smoking or the computer to suddenly flash the "blue screen of death." Then there was the plague of frogs in the bathroom that put our daughter of potty-training for about six months.

Normally, when things get tough, I can take solace in reading. But I surveyed my packing box of favorite books with the apathetic air of someone who stands in front of the open refrigerator for 10 minutes and can't find anything. Nothing sounded good. So I just sat down and started writing something I would want to read.

Being a huge fan of vampire movies and TV shows, I wondered, what would be the most humiliating way possible to be turned into a vampire- a story that a vampire would be embarrassed to share with their vampire buddies over a nice glass of Type O. Well, first, you'd have to make the protaganist a bit of an accidental loser. She's single, almost 30, and a librarian working in the small Kentucky town where she grew up. This "triple whammy of worry" has made her a permanent fixture on her Mama's prayer list. And despite the fact that's pretty good at her job, she just got canned so her boss could replace her with someone who occasionally starts workplace fires. She drowns her sorrows at the local faux nostalgia-themed sports bar and during the commute home, she's mistaken for a deer and then shot by a drunk hunter. And then she wakes up as a vampire.

And thus, Jane Jameson and the wacky denizens of Half-Moon Hollow were born.

It took me almost a year to complete and edit a draft of the book, which I planned as the first in a three-book series. I spent three months using agentquery.com to ruthlessly stalk potential literary agents. (There were a lot of lists involved, I don't want to re-live it.) I was gently rejected by at least half of them. I corresponded with some very nice, very patient people, but ultimately signed with the fabulous Stephany Evans of Fine Print Literary Management. Stephany was willing to take to the time to give me advice on how to imp
Website:
http://www.mollyharper.com
Genres:
Humor / Science Fiction Fantasy