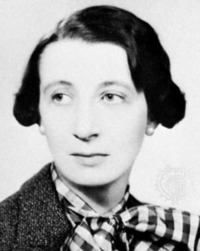 Josephine Tey was a pseudonym of Elizabeth Mackintosh. Josephine was her mother's first name and Tey the surname of an English Grandmother. As Josephine Tey, she wrote six mystery novels including Scotland Yard's Inspector Alan Grant.

The first of these, 'The Man in the Queue' (1929) was published under the pseudonym of Gordon Daviot, whose name also appears on the title page of another of her 1929 novels, 'Kit An Unvarnished History'. She also used the Daviot by-line for a biography of the 17th century cavalry leader John Graham, which was entitled 'Claverhouse' (1937).

Mackintosh also wrote plays (both one act and full length), some of which were produced during her lifetime, under the pseudonym Gordon Daviot. The district of Daviot, near her home of Inverness in Scotland, was a location her family had vacationed. The name Gordon does not appear in either her family or her history.

Elizabeth Mackintosh came of age during World War I, attending Anstey Physical Training College in Birmingham, England during the years 1915-1918. Upon graduation, she became a physical training instructor for eight years. In 1926, her mother died and she returned home to Inverness to care for her invalid father. Busy with household duties, she turned to writing as a diversion, and was successful in creating a second career.

Her novel 'The Daughter of Time' (1951) was voted the greatest mystery novel of all time by the Crime Writers' Association in 1990.

Miss Mackintosh never married, and died at the age of 55, in London. A shy woman, she is reported to have been somewhat of a mystery even to her intimate friends. While her death seems to have been a surprise, there is some indication she may have known she was fatally ill for some time prior to her passing.
Born:
July 25, 1896
Died:
February 13, 1952
Genres:
History