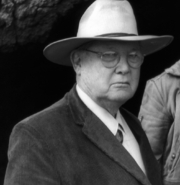 Innovative and restless in his nature, he was bored by the routine of legal practice, the only part of which he enjoyed was trial work and the development of trial strategy. In his spare time, he began to write for pulp magazines, which also fostered the early careers of Dashiell Hammett and Raymond Chandler. He created many different series characters for the pulps, including the ingenious Lester Leith, a "gentleman thief" in the tradition of Raffles, and Ken Corning, a crusading lawyer who was the archetype of his most successful creation, the fictional lawyer and crime-solver Perry Mason, about whom he wrote more than eighty novels. With the success of Perry Mason, he gradually reduced his contributions to the pulp magazines, eventually withdrawing from the medium entirely, except for non-fiction articles on travel, Western history, and forensic science.
Born:
July 17, 1889
Died:
March 11, 1970